Thank you to everyone who has recently started following my site (about 100 of you)! Since I returned from India , I have been busy with many tasks, including the creation of a project timeline for a digital music archive. I do plan to continue this blog at some point in the near future, however other priorities have taken precedence.

In the meantime, if you come across anything you think I might find interesting (on the web), feel free to post it below!

It feels odd to throw the word “applied” in front of ethnomusicology. That is, it seems natural enough for the implication to exist regardless of the prefix. Why is it that the applied sector needs to be separate from all-things-academic or “intellectual”…? They seem to go hand in hand – one flows out of the other, or so I’ve thought. If I were giving my own elevator speech, you know, the one-minute answer to the question, “What do you do?” I would never insert the word “applied,” even though I would definitely categorize my work that way in my head. There are too many implications to it – or maybe that’s in my head, too. Our work has an impact on the communities we study regardless of the final product. Not sure why this is on my mind today – the whole thing seems as silly as the supposed distinction between musicology and ethnomusicology.

I have been searching for hip-hop teaching resources, as well as academic journals outside of the ethno realm that an article on hip-hop would slide into. Along the way, I’ve found some pretty good resources and wanted to share. I’ll add these to my resources page as well, but if you know of any others, let me know!

The Poetics of Hip Hop

The Evolution of Rap Music in the U.S. (with Lesson Plans) 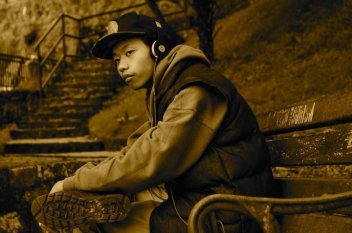 Dagyap is a Tibetan hip-hop artist born and living in India. Just twenty-one years old, his real name is Sonam Chopel. He is known for releasing music that relates to the various problems that Tibetans face in exile. According to his facebook page, his influences are Jay Z, Tupac, the Game, and the Dalai Lama. That should give you a hint of what you are about to hear.

Dagyap has not responded to my requests for an interview, unlike some other Tibetans in the exiled music scene. Yesterday he released a new piece on YouTube called “Brothers on Fire,” and I wanted to use this post/his spotlight to discuss the piece. If you need some background on the recent immolations of several Tibetan monks/nuns, consider reading the following articles, and the video that follows in this post:

I hate to include this video, but hold your breath and take a look [graphic warning]:

Now that you’re [hopefully] disgusted by this, and by your ignorance of its recent occurrence [13 times] in protest of the Chinese occupation, let’s take a look at Dagyap’s newest release, “Brothers on Fire” –

Before I continue, I’d like to mention [in case you aren’t aware] that as Marie Marshall recently said to me in another context, “The United States is in bed with China” – therefore nothing has/will be done about this via the United States. Tibet is virtually invisible in the American media, and our ridiculous relationship with China is the reason why (though with that said, the same ridiculous relationship may end up helping us face whatever is about to happen in North Korea as a result of Kim Jong Il’s death).

As you saw, the video opens with a salute for surviving the brutal Chinese mayhem.  The lyrics are as follows:

This is musical expression that seeks to invoke change. This piece is framing an era, commenting on the current affairs of Tibetans while simultaneously reminding us that no one, including the UN, is doing a thing about it. Many musicians are social activists, and Dagyap is no exception.  The Tibetan issue is one of  global importance.  Hip-hop artists in the United States and South African have used their music as a means to disseminate the message of racial oppression, and artists in Indonesia have used hip-hop to speak out against government injustice and Islamic rule. Dagyap, and other Indo-Tibetan artists, are doing the same by sending this message: the Chinese are killing Tibetans. They are attempting to exterminate them.

Hip-hop in the Tibetan diaspora is a fairly new genre, as my forthcoming dissertation** [and hopefully, a few conference papers before then] will discuss.   In this piece, Dagyap names his oppressors, calls for change, and ends with the phrase “Bod Gyalo!” – illegal on Chinese soil [including the Tibetan autonomous region], this means “Victory for Tibet!” Here, here.  Congratulations to Dagyap on this outstanding piece of social commentary. Let’s share it with the stakeholders who give a damn, and more importantly, with those who don’t…

(**First I have to get this thesis churned out!)

Sometimes the best academic discourse entails a few sarcastic lines in an email shared between a few folks. I’m not sure why I’m starting off with that, but for today, it works.

Okay listen, I’m sitting in this super posh resort hotel room in Destin for the day. There’s a Harry Potter marathon on ABC-Family, and I have a balcony overlooking the ocean. In other words, I’m set. I wish this could be the setting for all of my weekend work-days. Although I’m planning to run down to one of the resort restaurants to find sustenance, the majority of my day will be spent sitting here on the balcony with the ocean as my soundtrack – grading and writing, grading and writing (okay so there may be a bottle of merlot involved at some point soon).

I have found lately that I need to change my work location quite frequently in order to stay productive. At one point this past week during a marathon three days without sleep, I chose to sit at a friends’ kitchen table for eight hours while everyone in the house slept. It may have been the most productive eight hours of the semester, and I think it was simply due to the venue change. This is why I’m hopeful for the productivity that will ensue out of my current location. I think it’s also because the hotel room is not full of “things.” It’s not cluttered with junk, household things, dogs, dog fur, or piles of books and responsibilities. In other words, it is lovely.

So with that rant, I think sitting in a hotel room a couple times per semester on weekends just to get work done may become a personal ritual.