I spent this weekend playing tourist with a friend who came to town. On Sunday I took her to a Second Line, and let her have the camera (she’s thinking of buying one)… I think she did a great job! 🙂 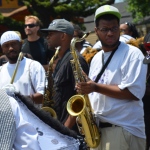 I just blinked my eyes a couple of times and realized it’s been over a month since I’ve posted here. I know, I know – you’ve been utterly distraught about it and just couldn’t imagine your virtual life without me in it, right? 😉  Well – you’re in luck. Here I go:

It’s odd how ethnomusicological projects seem to grow organically – they very quickly consume everything in their way. It can be exhilarating! It’s been a while since I’ve stepped back and taken inventory of my projects in progress, so I’m going to save us all some time and give you a list of bullets rather than a narrative. In order of current importance and time consumption:

Next year’s SEM/AMS/SMT mega conference is in New Orleans and I have a few pertinent topics, above, that I could attempt a paper submission for (though acceptance of the younger grad student papers is rare). I think that even though my thesis research is on street musicians, I’m eyeing NOLA Bounce as the topic I’d like to present on at SEM (though my abstract would likely be trashed at first sight).  Anyway – my thesis includes sonic mapping of street musicians, and I could come up with a great “field trip”  handout for people to go and see these soundmarks live since the presentation would be in New Orleans… much to think about. Not a lot of time to do it in.

Lastly, if you’ve followed this blog at all in the past few years, you probably know that my eventual dissertation topic will be  music in the Tibetan community of Dharamsala, India. Most folks who study Tibetan music tend to lean towards music for Buddhist ritual and traditional genres. My goal (big shock here) will be popular music – perhaps working with Lobsang Wangyal who organizes the Tibetan music awards from McLeod Ganj. With that said, I’ve also been peeking at the music of Bhutan and Nepal. Obstacles = language, money, accessibility, government regulations. Working on that.

Anyway – that’s my list of current projects and their potential trajectories. As for the day-to-day, it currently involves a giant stack of grading, 2-3 books to read per week, and as usual, hanging with the most fabulous musicologist-friends on the planet.  By Saturday, I hope to make another post  that illustrates how absolutely awesome the SEM conference was in Philadelphia last week.

Cover of Why New Orleans Matters

I have just discovered that I can put my plastic camelback bottle in the microwave to make tea without an explosion. Now that I have, I’m sitting on the office couch with a blankie reading Tom Piazza’s “Why New Orleans Matters“. Obviously it’s Friday morning. If you must know, I am reading it for a combination of work and pleasure. I’ve read through it several times, and anyone who has knows that it’s chock full of amazing quotes that help explain to folks, well, why New Orleans matters. If I remember correctly, there are a few that would slip ever-so-nicely into the cracks of my thesis – hence the work aspect… and it’s a nice relaxing way to spend Friday morning in the office, right? Now my tea is getting cold…

Here are a few good quotes from the current pages I’m flipping through:

“New Orleans is the most religious place I have ever been, even though much of the population is profoundly profane, pagan, and steeped in the seven deadly sins and some others not even listed.”

“Mac Rebennack, better known as Dr. John, once told me that when a brass band plays at a small club back up in one of the neighborhoods, it’s as if the audience – dancing, singing to the refrains, laughing – is part of the band. They are two parts of the same thing. The dancers interpret, or it might be better to say literally embody, the sounds of the band, answering the instruments. Since everyone is listening to different parts of the music – she to the trumpet melody, he to the bass drum, she to the trombone – the audience is a working model in three dimensions of the music, a synesthesic transformation of materials. And of course the band is also watching the dances, and getting ideas from the dancers’ gestures. The relationship between band and audience is in that sense like the relationship between two lovers making love, where cause and effect becomes very hard to see, even impossible to call by its right name…”

Of jazz funerals… “In the real old times they would continue this way (in a dirge) all the way to the graveyard before the next stage  of the funeral ritual took place, but even New Orleans isn’t totally immune to the Worldwide Attention Deficit, and today this part of the procession will last for a block or two at most before the band stops playing the dirge…and the snare drum beats out a familiar sharp tattoo, the band launches into a jubilant, life-affirming stomp, and the entire crowd explodes into dance.”

“It amounts to a kind of cultural synesthesia in which music is food, and food is a kind of choreography, and dance is a way of dramatizing the fact that you are still alive for another year, another funeral, another Mardi Gras.”

This weekend I finally picked up a copy of Sidewalk Saints, a newly published book by Jim Flynn that paints the life portraits of street performers in New Orleans.  Otis had a few copies. The author, a Manhattan native, spent a year documenting the performers’ lives, eventually taking to the streets himself on guitar.

The book itself comes with a companion website (click on the link above) which allows you to make your own New Orleans street performer compilation and view high resolution versions of the photos in the book. If you’re reading this, you’re probably aware that I’m in the throes of a similar project which concentrates on different aspects, and takes quite a different angle. Jim’s book gives us exactly what the cover states – life portraits of the performers… not only musicians, but magicians, balloon artists, human statues, card readers, puppeteers, and more.

I’m looking forward to reading the text, and writing questions/comments in the margins. We’re working with several of the same “fixture” musicians (at first glance of his text, many of the performers Jim covered have since “moved on” – so many of them are migrant, so this is expected). Anyway – more to come soon…stay tuned.

Working hard today? Take a break to listen to some bounce tunes…