Well that’s that. I’m having a love affair with Mozart. Now on to the Gran Partita. My new goal is to perform a lecture series on all 3 of Mozart’s Wind Serenades. Then I’ll back up a bit and disentangle a few divertimentos.

My lecture recital went well. I know it must have, because it’s 24 hours later and I’m not having doubts about it yet. Usually I have these filters in my head saying, “I think it went okay”, “I did terrible”, “ He said I did great but he’s just saying that” – I could go down the list. This is the first time [ever] that hasn’t happened. I was actually happier with this performance than either of my undergraduate recitals or anything else I’ve ever conducted as a graduate student– except perhaps the culminating spring concert of Saturday Music School, but that burst of pride had everything to do with how far my students had come.

The Mozart performance was nowhere near perfect – neither was the lecture… but I was prepared for both, and so was my ensemble. Actually, it wasn’t the best they’ve played it, but knowing how hard they worked on it, and how great they sounded in rehearsals, I’m thrilled with the results.

(This is one of those conflicting Buddhist moments of mine – is it okay to be proud of an accomplishment? WWBD?)…

I can take a deep breath now that it’s over, and find a new project or two. I’ve got 3 weeks until diagnostic exams for theory placement in Tallahassee, so my head will be stuck in a mosaic of musically historical examples ‘til then. Starting tomorrow, at least I can do it while sitting by a pool in Florida (assuming we hit the road ahead of this tropical storm). Cocktail please! The Type A side of me is trying to come up with a study plan. I like chronology so I think I’ll start with Josquin and end with John Mackey. The idea is that I should be able to analyze an excerpt from any piece of music put in front of me from the past thousand years or so, and be able to pop out the composer, their compositional techniques, style, and any relevant cultural context)…. Uh huh. Getting right on that. Ironic – I’m jumping into an academic program with an emphasis on music of the entire planet with the intention of escaping European art music for a while, and yet I can’t escape European art music in my round of entrance exams. 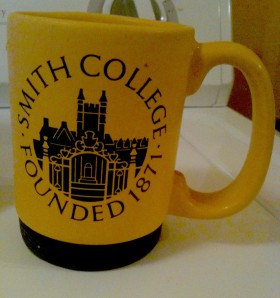 Random tidbit: I spent about an hour tonight vigorously playing tabla on a rough ceramic coffee mug while chatting with my partner. I counted at least 15 timbre variations on that silly mug based on fingernail tapping, swiping finger-pads, and the occasional palm slap. I wanted to record it. Maybe it’s a sign that I need to rest… or lay off the coffee… or start this degree program.